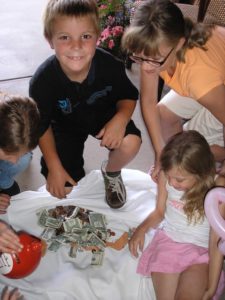 Bandleader and television personality Lawrence Welk was one of eight children born to German/Russian immigrant parents in North Dakota. While winters were grim and money was tight, the family found joy in singing and dancing together. Lawrence left his family farm in North Dakota on his 21st birthday with an accordion, the clothes on his back, a fourth grade education and command only of the German language. He took his musical talent and joyful spirit with him as he traveled the Midwest playing at barn dances, on local radio and, eventually, in dance halls around the country.  In 1951 KTLA television broadcast his show and the effervescent sound of his “Champagne Music” was heard across the nation, every Saturday night for the next 30 years.

Welk never forgot his humble beginnings, speaking fondly about his family and birthplace, where he said he was taught to work, share and live “according to God’s laws.” In 1960, the family-oriented bandleader with a penchant for “treating people right” founded the Lawrence Welk Family Foundation. He believed deeply in the importance of a nurturing family and the opportunity for all to live with dignity. In keeping with this, the Lawrence Welk Family Foundation supports grass-roots organizations that demonstrate a long-term commitment to the under served children and families participating in their programs.

Executive Director, Lisa Parker says, “A Step Beyond is the perfect nonprofit partner for us. ASB takes the same love of music and dance that kept our Granddad’s feet tapping to ignite the creative spark in its students while, at the same time, demonstrating a long term commitment to supporting them and their families on and off the dance floor. My grandfather really believed in investing in youth so they could prosper as individuals and as future leaders. ASB’s programs, administration and leadership are among the most thoughtful and effective we have encountered in our decades of doing this work. I wish my Granddad could see it for himself. I can see the ear to ear smile and twinkle in his eye he would surely have.”

The leadership role passed from mother to daughter in 1997 when Welk’s granddaughter Lisa Parker took over as President and Executive Director. Today, second and third generations of the Welk family serve on the Board of Directors and the 20 members of the 4th generation are now the Junior Board.  This “G4” Junior Board participates in an annual “philanthropy camp” that includes volunteering and service projects, fundraising, site visits to area nonprofits and grantmaking.

“We came together with much fanfare at the annual meeting and counted all this change,” says Lisa.

Today, three generations of the extended Welk family, ages eleven to eighty-five, give and volunteer together in order to nurture community engagement and the philanthropic spirit across generations and over the course of a lifetime.

About A Step Beyond: